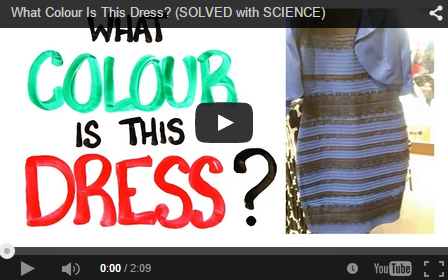 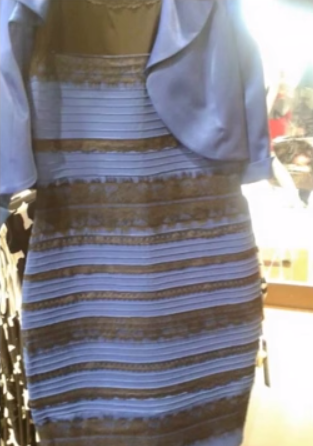 Blue and black or white and gold dress, the controversial optical illusion dress

Just speaking of the photo above (i.e., not the dress seeing in person or in actual), I saw “white and gold” the first time I encountered the photo of this dress, and I wondered why some people would insist on seeing this dress as “blue and black.” Were they lying? I didn’t really know and didn’t make further research, but random explanations appeared on my personal Facebook’s news feed.

Interestingly, these past few days, I saw the same photo of the dress again, but as “blue and black.” I was quite startled, because I was originally firm that the dress is “white and gold.” Until I saw another video that explained why:

The first time I saw the dress on that particular video, I was firm to seeing “blue and black” while my eyes focused on it. But as I progressed and understood the explanation behind it, I slowly saw “white and gold” again! I doubted myself so I repeated the video. And even though I know and I was sure that I saw “black and blue” on the video, I just keep on seeing “white and gold” again now when I focus my eyes on the dress. Interestingly as well, when I don’t focus my eyes on the dress, I see it as “blue and black.” Mind-boggling, really. But besides all the scientific explanations about the photo, I guess it has something to do with the current state of mind you have (like if you’re currently relaxed or stressed), or how you want to see things. Similar to the popular “Beauty is in the eye of the beholder.” Then again, I’m not really sure.

When I see this photo of the dress again as “blue and black” while my eyes is focused on it, I’ll have to observe my state of mind and update here my observations.

On other note, if we speak about the dress in actuality (i.e., see the dress in person), BBC’s David Sillito, with the help of professor John Barbur, noted that the dress is actually blue and black. Changing the exposure, changing the color balance will make the dress appear to be color “white and gold.” See the video here: http://www.bbc.com/news/uk-31666458

Em is a freelance Software Project Manager, Software Tester, and Virtual Assistant. She also do Graphics Design, Illustration, Presentation Designs, and Website Development. In year 2008, she graduated with a Bachelor's Degree in Computer Science in DLSU-Manila, and currently taking up Master's Degree in Business Administration major in Entrepreneurship in UST. She's also into singing and playing video games.
Join 20 other subscribers
Loading Comments...
%d bloggers like this: